skip to main | skip to sidebar

July 28th's walk was on the only night of the week without thunderstorms. The air was thick, yet several walkers came. Some had never been to Storm King before. Some were from neighboring towns and states, but most of us were locals enjoying "our" mountain.
Here are all our comments and some photographs taken by the Silent Walks' sweeper, Thom Munterich. 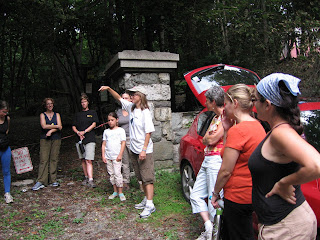 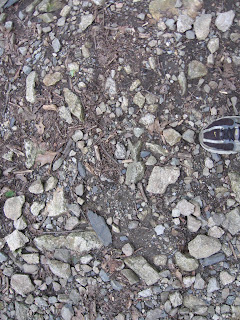 "Time for decompression....crunch of gravel under feet. Trying to walk silently. Feeling like a character in a play--waiting for the director's guidance! Felt painfully interconnected to the group."

" Broken glass glints in the sun like the eyes of rabid dogs.
Peace to Lily and her parents." 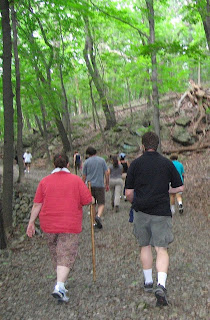 "It seems very cultivated and civilized NOT to speak with strangers on such a beautiful trail.
Respectful of nature and each other."

"I'm definitely coming again. We need more silence in life. Of course there was noise from our feet on the stone road, but it was similar to Dorothy stepping out of her house in Oz when all of us stepped off the road onto the dirt path. It became quieter and greener and more beautiful. By the way, I'm embarrassed to say that I've never been to that lookout before. Very nice!" 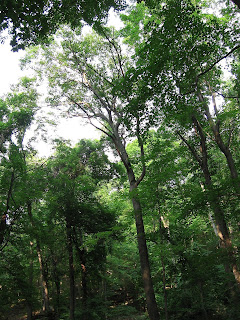 "It was such a treat to be non-verbal for a while. I almost don't want to write anything.
Beautiful walk." 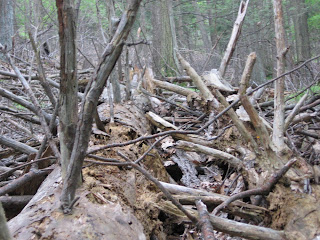 "When I first started the walk, I thought that I would be more attuned with nature. Instead, I found myself more aware of myself on the walk, such as my breathing and my footsteps on the rocks. It was a very positive experience." 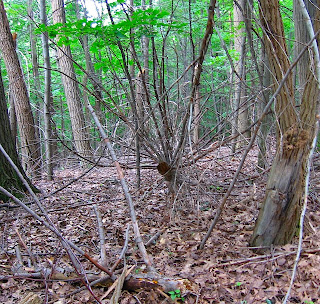 "Different group dynamic--more about the walk, the sounds, the sights, the bugs and not so much about the people. Amazing how different this month's walk was compared to June." 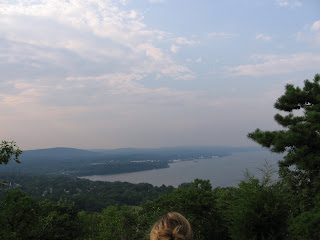 "It's as if you are walking in nature's confines with the tree cover, brooks gurgling, birds signing and bugs buzzing. Then when you reach the overlook, it's as if the door is thrown open and you see this amazing river in all its glory--the reward for the warm climb!" 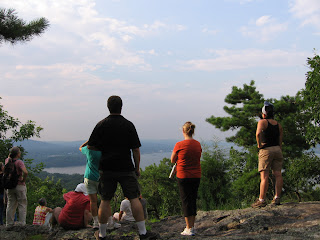 "My second time felt completely normal not to be talking. More people came this time, including a young girl who seemed to enjoy the challenge. Weather was hot, muggy, but we didn't get rained on." 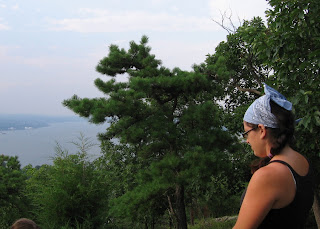 "Very Nice. To my surprise, not talking was only hard for the first two minutes. Looking forward to the next." 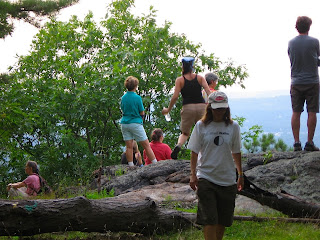 "I noticed the daddy longlegs speeding along beside us, little orange dots just above the path.
The light slanted through the trees, yellow and hazy.
As our footsteps fell into a rhythm, it was easy to be quiet." 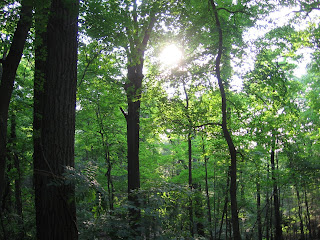 "The sun was high and filtered through the trees. I could really hear the wind. A beautiful evening." 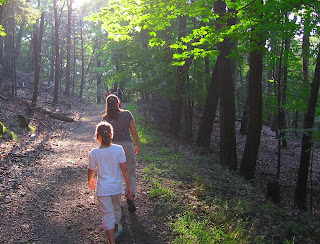 "I had a wonderful adventure! My mom and I saw a mushroom. There was an awesome view! I loved my experience of the silent walk." 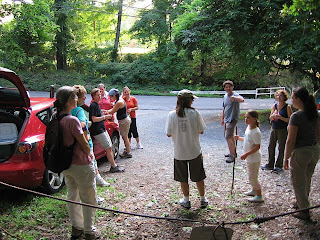 After the walk, we enjoyed fresh blueberries and shared our experiences, where we came from, what we noticed. What a pleasant group of people!
Thanks to everyone who took time out of their schedules to create this shared experience.
Join us on August 27.
Posted by jackie skrzynski at 4:37 AM 2 comments:

The next walk is July 28th! Support your local artist and the Silent Walks on the Half Moon by buying a bandana or t-shirt. Help spread the buzz.
Posted by jackie skrzynski at 10:01 AM No comments:

What, When, Where information for the Silent Walks

Description:
The project will consist of 12 once-a-month performances called “Silent Walks on the Half-Moon.” Each performance will lead participants on a group silent walk through the woods at the base of Storm King Mountain. This mountain is part of the Hudson Highlands, a chain of mountains that border the lower Hudson River.
Where: Participants will meet at a designated parking area at the Mountain Road trailhead in Cornwall-on-Hudson. There, they will be briefly introduced to the performance, including the requirement of silence. Participants will be directed to follow each other along a wide path for about 20 minutes to a trail spur that goes to a look out. From the look out, they will be able to view an impressive expanse of the Hudson River that stretches for about four miles.
When: The performances will take place once a month at 6pm on the evening of the waxing half-moon. Tip: Waxing moons are being born, so when you add a line to the crescent, it forms the letter “b.” Waning moons are dying, so the added line forms the letter “d.” This day of the month was chosen to commemorate Henry Hudson’s vessel, the Halfmoon. (This year marks the 400th anniversary of his sailing the Hudson River, so many villages are organizing celebrations.)
The time of day was chosen for its convenience to the workday and for its clear demonstration of light changing over the course of the year. Imagine the difference between the first sunny 6pm walk in June and the darkness at 6pm in December. Participants are encouraged to attend as many walks as they can throughout the year. After each person has had a chance to enjoy the view, the procession will follow a loop back down to the trailhead. People are encouraged to share their experiences of the walk before leaving.

We were a small group of old and new friends. 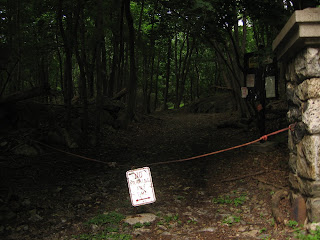 We walked in silence to the view and back. Before leaving, each walker wrote about the experience. They could write just a few words if they wanted. These comments follow. 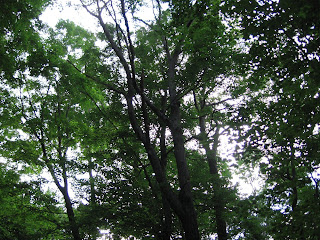 Just looking, listening and feeling the wind. Trying not to let my mind wander. 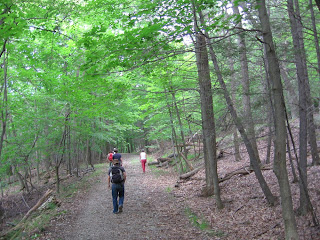 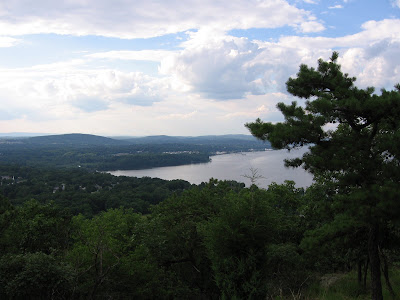 Tuning into a earth without gadgets. 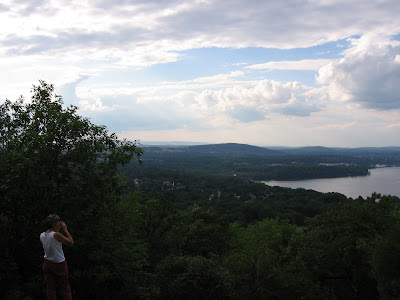 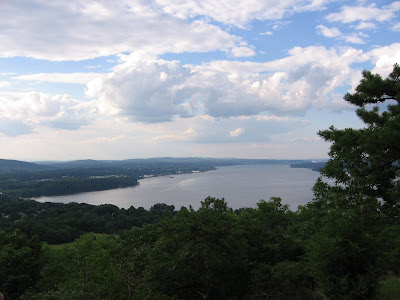 Interesting experience. Not what I expected exactly. I expected to be more aware of my surroundings, which I was, but I also became acutely aware of the movements and body language of the individuals in the group - the rhythms and sounds of their walking. We relied on our visual cues to stay together. I sometimes felt like I was passing through the space unseen. At moments I felt like a tracker. There were a lot of gnats that normally I would have complained about. It was nice not to complain or listen to others complain. It was a beautifully lit evening with dramatic clouds. Looking forward to the next hike.

When we returned, we shared how it felt. One person had tried to see the Hudson River without any buildings to get an idea of how it might have looked when Henry Hudson first sailed it. What would the ship have looked like to a native standing here? Another person said it was hard not to think about work. She had to make an effort to "be here now." Another walker found great comfort in being released from the burden of small talk. Personally, not talking felt very unnatural to me at first. It was hard! By the end, though, I was remembering times when I had wished for silence when in loud company. I was thankful I hadn't ruined anyone's walk with silly, obvious observations. We regrouped at 2Alice's for the reception and further discussion.

Posted by jackie skrzynski at 7:08 AM 2 comments:

Preparing for the first walk and a bit of background 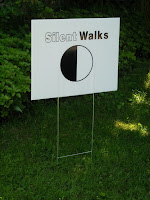 These signs lead participants from Rt 218 to the Storm King trail head on Mountain Road.

Background
Contextualizing the Silent Walks as an artistic experience allows participants to “turn on their art light.” They will consider their sensory experience in a consciously aesthetic way. That is also the reason to walk in silence. Sharing without words will allow participants to pay attention to the ambient sounds, smells, colors and weather rather than their conversations. Not talking does not mean not sharing, as each participant will be part of a large group walking silently along a trail. Perhaps they will even feel like a herd, and while that may seem humorous, the identification with what is animal about us, and our collective experience, is the core concept of the Silent Walks.
Skrzynski considers the walks as combining inspirational elements from several artists' works. She has always admired Andy Goldsworthy and Richard Long, two artists who essentially point to nature and say, “Notice this!” while making works that are both exquisitely formal and collaborate with natural elements. The Silent Walks also pay homage to the venerable tradition of the Hudson River School of landscape painters. Importantly, these events intend to build community. Skrzynski attributes the collaborative performances by the artist Rirkrit Tarivanija, who cooked meals for people in his gallery performances, as perhaps the most important influence. Mountain, river, community, sharing, access, creating memory rather than evoking it--fostering a connection to a place--this is art.

Skrzynski believes participants in the Silent Walks will retain a potent memory of this specific place at this particular time. Especially for those who walk each month, memories of seasonal ambience, discomfort and pleasure will form a profound awareness of the Storm King Mountain over time. She intends for these experiences to permeate into a daily awareness of our connections to our surroundings. Skrzynski also believes in the power of the ephemeral. Each performance survives only in memory, yet these memories can change behavior. Her community is proud of its relationship to the Hudson River and has fought to keep it unspoiled. These performances participate in that tradition, creating a chance to form lasting connections within the simple act of taking a walk.

With the Silent Walks, Skrzynski creates a context, naming a walk through the woods as ‘Art’ to alter concepts of what and who is nature, and what and who makes art.

For locals, these walks will foster a “pride of place” as they share the unique qualities of where they live and pay homage to it. As part of the “Celebrate New York 400” events, the walks will have a historical context as well. For example, 30 years ago the Hudson Valley community fought to save Storm King Mountain from being the site of a huge power plant. (This gave birth to the Scenic Hudson organization and most consider it the birth of the environmental movement.) The post-walk reception, the blog and the facebook page will provide another layer of community interaction. Because the artwork is fundamentally participatory, each walk will engender a shared experience that will connect people not only to their environment, but also to each other.

In a larger sense, Skrzynski hopes this project will be the first of many community-based Silent Walks started by other artists anywhere in the world.
Posted by jackie skrzynski at 3:02 AM 3 comments: 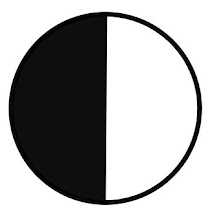 jackie skrzynski
Beyond her studio practice, Jackie Skrzynski is interested in projects that bring art to the community in creative ways. P.U.G. Projects is the primary way she does this. She also exhibits her drawings and paintings extensively, most recently at Eastern Kentucky University and Theo Ganz Studio in Beacon, NY. Her work was part of the exhibit, Art about Motherhood: The Last Taboo, curated by Diana Quinby, in Avallon, France. Skrzynski was nominated for the Painters and Sculptors Grant from the Joan Mitchell Foundation, received a NYFA SOS grant and four Orange Arts Individual Artist grants. Her work has been published in Lunch Ticket, 2River View, Reconciling Art and Mothering, Ten Words and One Shot, and The Gathering of the Tribes Magazine. See her work at jackieskrzynski.com.